Joe Cohen is the founder and CEO of SelfDecode. Joe suffered from many health issues growing up, but, by taking a personalized approach to his health, he was able to find the strategies that worked best for his body. Read on to learn more about Joe Cohen!

Genius Labs founder, Joe Cohen, has a personal story that has spoken to millions, as he was often ill as a child and suffered from many chronic ailments.

Unfortunately, he won the lottery for genetically predisposed disorders but refused to accept a life marked with illness, drug dependency, and frequent trips to the doctor.

Growing up, he had several obscure debilitating symptoms but did not officially fit into a diagnosis, as a result of both poor diet and lifestyle, and bad genes. He suffered from chronic inflammation, brain fog, fatigue, digestive problems, anxiety, depression, and other issues.

He had almost given up hope. He was broke, single and couldn’t hold down a job. He was a pre-med student failing out of college. He couldn’t pay attention to the lectures, was missing class due to being sick, and couldn’t focus on getting his assignments done.

The doctors thought he had a lot of things, but weren’t right about most of them.

He tried all their suggestions, took the pills they prescribed and tried every magic “cure” he could find.

Finally, As he hit rock bottom at the age of 25, he’d had enough. He realized that he was never going to reach his goals and live the life he wanted to if he remained sick.

Frustrated, he became a skeptic of the health industry. He decided it was time for a big change in how he approached his health, taking matters into his own hands. Rather than buying into any existing widespread beliefs, he embarked on a journey of self-experimentation to improve his health – an approach that has since become known as “biohacking.” He decided to stop following any cookie cutter approaches that weren’t unique to his own body.

In 2013, while still a pre-med student, he read thousands of PubMed articles in order to understand the mechanisms behind his health issues. He immediately began experimenting with peer-reviewed healing strategies like a seasoned scientist, and it was working. He took on experimenting with anything and everything he could get his hands on in increasing doses (some of which landed him in an emergency room).

And you know what?

It was amazing to see years of suffering quickly disappear as he applied everything he learned.

The life-changing answer he discovered was that his unique genes were predisposing him to specific health problems, like gut inflammation or oxidative stress in his brain, but that he could implement specific changes to increase or decrease his gene’s expression and counteract the negative effects!

After about a year, he started to hit some breakthroughs with his health and gained some understanding of what was going on with him that no other doctor was able to shed light on.

Suddenly a new man and a picture of health and vitality, Joe was able to complete the pre-med requirements at university and immediately launched SelfHacked.com to share his remarkable findings with the world because he wanted to make a big impact in improving global health. Even though he once feared failing out, Joe graduated with Bachelors of Science degrees in Finance and Psychology.

It wasn’t long before he recruited the team of research doctors, science writers, and computer scientists that today comprise Genius Labs, creator of the proprietary SelfDecode DNA Analysis and LabTestAnalyzer.

In the video below, Joe Cohen talks about the health issues he had growing up and why he created SelfDecode.

SelfHacked traffic started to take off due to his impressive and thorough science-based articles with unique perspectives on health that nobody else was writing about.

It turns out that there are millions of people who are struggling with similar health issues as Joe did, who are not getting answers from mainstream medicine or alternative medicine.

Soon, people with complex mysterious health issues started to approach him for consultations, because Joe has the unique ability to dig deep into the biological mechanisms of such health problems in order to deduce potential remedies to address the root causes. His approach is 100% based on science and self-experimentation rather than on any specific alternative medicine methods, but there was a downside: time.

Joe Cohen was able to hack his genes after months of trying to understand them by reading the literature. After repeating the same process for over a thousand clients and over 30,000 PubMed articles, he knew there had to be an easier way. He used his approach to develop SelfDecode, a comprehensive DNA analysis tool to help people without biomedical backgrounds make the most of their DNA data.

But he didn’t stop there.

Having known thousands of clients who had “normal” lab results but were feeling awful, Joe founded LabTestAnalyzer – a web application to help people understand the physiology behind their lab tests, track their historical trend levels, what their lab tests mean, and access everything that science has to say about these lab tests so that people can be fully informed and proactive about their health. If the tests are suboptimal or out of range, the program can tell users the potential causes of the deviations, what they can do to optimize their tests, and when they need to consult their physicians. 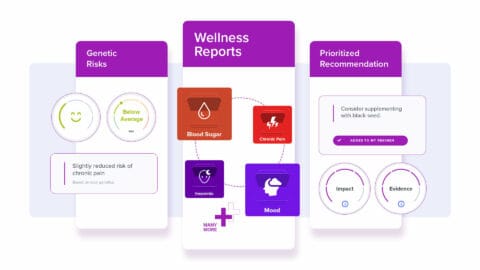 While doctors still play important roles in our care, it has become important that we seek to understand what is going on with our bodies, keep track of our own health data, and fully understand the options that are available to us.

Whether the medical industry likes it or not, up to 80% of Internet users have Googled about their health problems and remedies before visiting their doctors [1]. Genius Labs, with a team of 65+ well-qualified scientists, MDs, PhDs, NDs, and software engineers, seek to be the top science-based and propaganda-free resource that Googlers can rely upon to improve their health.

There are thousands of articles out there that will list a bunch of cookie-cutter solutions that you need to do to get healthy. But, at the end of the day, you can’t find anything that really works.

Trust Joe, he’s been there.

Today SelfHacked.com is among the most respected sources of peer-reviewed research and medically-reviewed recommendations on the planet. For that, Joe Cohen is widely recognized among the leading pioneers in research-based self-learning and self-experimentation, the field of study commonly known as biohacking. He has taken biohacking to the next level through unrivaled DNA and blood test analysis software.

This is the leading edge of health science, and Joe Cohen and his Genius Labs team have only just begun.

Informative
0
How do DNA tests work? What you need to know
Reviews
0
PureGenomics Review: How Are DNA and Nutrition Connected?
Informative
0
What To Do With Raw DNA Data: The Do’s And Don’ts